In order to set up a POC for a client, I’ve installed a new virtual machine with Windows Server 2012. Then I’ve installed SQL Server 2012 to try the new version of “Master Data Services”. When I launched the MDS Configuration Manager, I had the following issue :

So I followed the link http://go.microsoft.com/fwlink/?LinkId=226286. And I read : “To fix the issue, open a command prompt and go to the .Net directory. Run the command : aspnet_regiis –i.“.

But in fact, that doesn’t solve the problem as you can see in the following screenshot:

After checking, ASP.Net 4.5 is already installed on my machine but I forgot one feature : “WCF Services / HTTP Activation“. 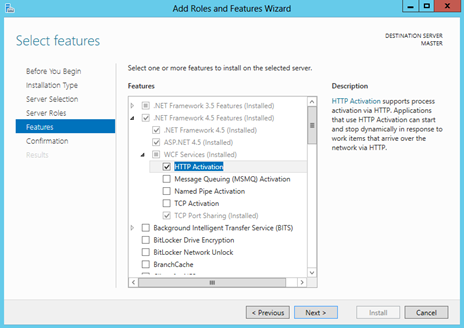 So, I’ve installed this feature….

And now the prerequisites for MDS are ok !